So I was just in Melbourne staying with one of my best buds and man have I been learning a lot about Australia. For example, despite it’s name the Huntsman spider isn’t poisonous and it builds some pretty spectacular webs. Gum tree sap is explosive so if there’s a bushfire near the a lot of gum trees, run as far as you can, as fast as you can.

Melbourne is a beautiful city which is full of culture, art, food and fun. I’ve had the chance to go to the Moomba Festival and watch some people jump off a pier into a notoriously stinky river to raise money for charities of their choice, visit a cracking museum/gallery which currently has a spectacular installation which consists of dozens of giant skulls piled up and scattered across a room. I’ve eaten amazing vegan food at Serotonin (which is now one of my favourite places on earth) and some great dumplings which remind me of home and climbed 1000 steps to get some incredible views of a stunning forest (I am very very unfit and now my butt muscles hurt so much I can barely walk…). I’ve also been hosted by one of the most wonderful friends and her incredible, kind and welcoming family who I’m incredibly grateful to have finally met after all these years! 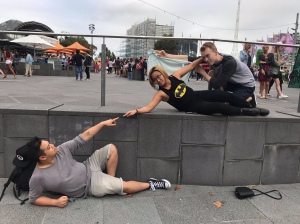 This post though is going to be about a very specific thing I got up to with my friend, her boyfriend and a bunch of his friends. They organised a huge city wide scavenger hunt. 30+ people turned up to win prizes that were both pretty bad and absolutely brilliant at the same time. A toy watch, a smiley face plastic ball, a set of maracas and more. The scavenger hunt had us recreating famous images, paintings, photos, movies, solving riddles, finding hidden bottles of gin and doing some other wacky things. It was physically and mentally exhausting competing in a new city half way across the world while also meeting dozens of new people and trying not to fuck things up for my team but holy crap was it fun.

And that’s the thing. It was fun to play a game with people with no goal other than to have a bloody great time. We all have to get old but does that always mean we have to grow up? So many people complain about having to “adult” and how boring it is being an adult. I have made the same comments and I’m guilty of being a total buzzkill sometimes too. But I think the reason we end up bitter, jaded and whiny adults is because we forget how to play. One thing that I always used to love as a kid that would help me to destress was play. Whether that was with my Pokémon toys, my PS1 or football in the garden with a tennis ball. Now I often have to remind myself to play more especially when I’m working a full time job.

Don’t get me wrong, I am not saying plan an elaborate scavenger hunt for 30 of your friends every week (although if you do, I’d be up for taking part). I’m saying to try to go back to playing when you get the opportunity. Use your lunch breaks to play some games on your phone (or if you’re like me, on your 3DS or PS Vita) or go outside with your colleagues and play a game of football using your jackets as the goalposts. At the weekends don’t just go to the pub every weekend. I love the pub but this week has reminded me how much fun actually playing is rather than just sitting and drinking. You can still catch up with your friends but you just get to do it while recapturing some of your youthful energy. That’ll only disappear if we let it. We all say that we’re “too busy” and we can’t take a break but there is always something that can wait.

A couple friends and I have a semi regular Friends marathon, KFC/vegan kebab, alcohol and Uno. And you know what? The food and the booze is great but the Uno really brings us together the most through competition and smack talk. The scavenger hunt let me see the city of Melbourne in a totally new way and allowed me to meet a bunch of new people while having silly, wacky fun.

This scavenger hunt reminded me to play more and it’s a damn shame that it took a trip half way across to reinforce that to me. Hopefully this post will help you play more and stress less! Trust me, it’ll be worth it. 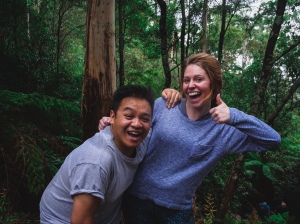