Hey, so it’s been a while! I had initially planned a little two week break over the Christmas holidays and BAM! Two months later, I’ve not done a damn thing on this blog. But I’m back and although it’s not on my usual Thursday spot, I thought I’d give you a little update on life. It’s going to be a little bit rambly but I’m just glad to be back on it! I’ve been a little unwell, a little demotivated and a lot lazy but I’m not beating myself up about it too much. 🙂

The first thing that I’ve noticed recently (and by recently I mean the last few months) is that I am not good with silence. Whether I’m at home, out or at work, I am completely unable to sit in silence. Recently silence makes me really really anxious. Everywhere I am I need to have music on or the TV on in the background. I don’t know why it started, but it’s affected the way I work, the way I relax and the way I look after myself. The strange thing is, there are some sounds and some noises that I can’t cope with. The sound of trains and the underground makes my skin crawl. The sound of other people talking gives me an instant headache. I only seem to be able to handle the sounds that I can control myself. My music, the TV, films. Other sounds are just jarring at the moment and I’m having to relearn how to cope with the rest of the world. 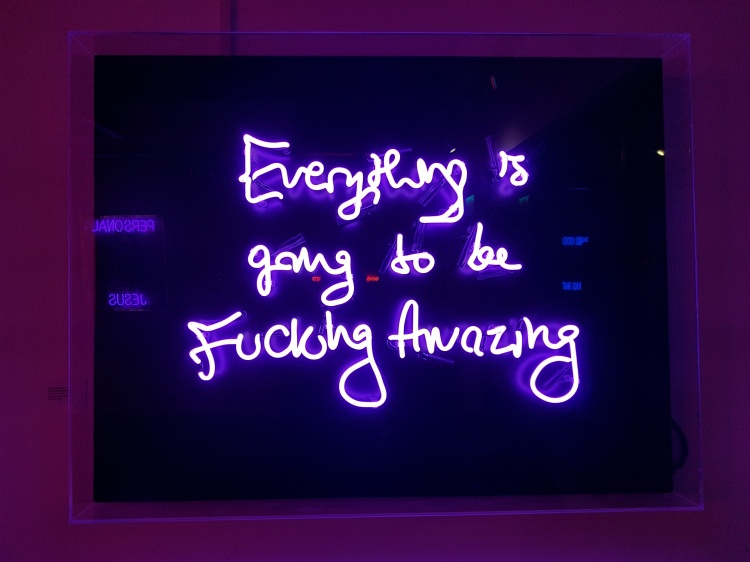 Neon art on display at the Rise Gallery in Croydon

Valentines day is coming up as well which is a source of anxiety for a lot of people. I’ve been single for 4/5 years now and happily single for a fair bit of it but it took me a long time to learn to love being single. I’m happier than ever to be single. Valentines day is a nice day for so many people in relationships but it often causes lots of people anxiety around their relationship status. It’s hard, but try not to focus on that. After all, self love is the most important kind of love there is. I know it’s cheesy as hell, but it’s 100% true.

Either way, please remember, you are wonderful, you deserve to be happy and it might take a little bit of time but everything is going to be fucking amazing.