So while I’ve been off sick I’ve had lots of time to think. Lots of time to try to understand the world, discover things in books, in pop culture and in everything else, I’ve been thinking a lot about my own culture, identities and representation. This will be a different kind of post (and significantly longer too) so let me know if you want to see more of this kind of post.

I, along with many others, have grown a little tired of being so woefully under-represented in mainstream media. I’m not just talking about Chinese people, I’m talking about people of colour in general. Obviously, being Chinese, I’m going to focus mainly on representation of Chinese and Oriental people in comic books and also mainstream movies, anime etc.

For those of you who know me, you know I’m a bit of a nerd. When I say a bit of a nerd I mean I’m a complete nerd. at least 50% of the content on my bookshelf is in comic form (with many, many, more digital comics) and a few years ago I picked up a Bruce Lee comic book. It was a 6 issue mini series about one of the most influential Hong Kong Chinese figures of modern times. A man known for, not only, his martial arts prowess and movies but his philosophies and incredibly deep insights into humanity, love, life, perseverance and many other topics. This comic was published between 1995-1996 and guess who wrote it? Some white dude. Okay, Mike Baron. Respected in his field, award winning and I’m sure very talented but have a look at some of the stuff Bruce was saying. “I’ve got to check my homeboys”, “Shelley, baby, sweetheart”. 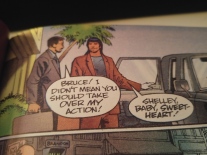 You would think that such a well respected man would be represented better, even in the 90’s. It’s tough to effectively represent Chinese people, even public figureheads like Bruce Lee, without any f***ing Asian people in it. Literally everyone behind the comic. Not a single Chinese person. How often do you find the N word in comic books? Even in the 90’s. But Chink? Apparently no problem there.

Thankfully, we’ve come a long way. That’s not to say that there’s not lots more work to be done. We’ve got Shang-Chi now who, despite being the stereotypical master of kung fu, is a total BAMF. (He was also created by a pair of white dudes, Steve Englehart and Jim Starlin). We also have Amadeus Cho. A young Korean super genius who’s currently serving as the Totally Awesome Hulk. He was created by Greg Pak and Takeshi Miyazawa, a Canadian Japanese dude who does some beautiful art work. The Cassandra Cain Batgirl is a total badass too.

On the flip side we have characters like Wong. He’s the “sidekick and manservant/valet” to Dr Strange created by Stan Lee and Steve Ditko in 1963. We have amazing Japanese anime films like Ghost in the Shell, which influenced the Matrix films, who are getting Hollywood adaptations where the main character is being played by Scarlett Johannson. We have Emma Stone playing a Hawaiian/Asian character in Aloha. Tilda Swinton playing the Ancient One, a Tibetan master of magic. The list goes on. So my request to white writers, if you’re going to create Asian characters, or use Asian characters, plots, adapt films, at the very least, let us represent ourselves. This is a great watch:

One of the things that the guy with the dyed grey hair says is that he’s never been described as sexy, or suave, just cute, funny and friendly. Now those words aren’t bad. They’re positive things. But put together like that, it sounds like you’re describing a child. Or a puppy.

Asian men are very very rarely allowed to be sexy or cool. Think Raj from BBT (which is a terrible show anyway) or Mosuka from Dexter, or Han Bryce Lee, the horrifically asexual Asian boss from the awful 2 Broke Girls. Almost anything that Ken Jeong is cast in (he slept with Shirley in Community but that was “disgusting” and used purely to make jokes). Danny Pudi’s Abed is only sexual when he’s playing famous white characters like Don Draper or Han Solo. Masi Oka in Heroes was pretty much asexual apart from that thing with Charlie which was short lived as she was sent to the past and he ended up single for the rest of it while several other white characters somehow had multiple relationships. How many Jackie Chan or Jet Li films end with them “getting the girl”? Don’t even get me started on the older, more outrageous films with Asian characters.

Asian women have it even worse. Lots of Asian women are depicted as being submissive, timid people who dote entirely on their man and are super sexualised and sexually compliant. This is often referred to as the “China Doll” stereotype. On the other hand you have the complete opposite as well the “Dragon Lady” the abrasive, aggressive, opportunistically sexual, gold digger type characters.

Like I said, we’re making progress. Glenn from the Walking Dead is a great character. Anything that Aziz Ansari is in is generally gold. Master of None has some great scenes about being typecast and stereotypes. The New Superman comic (which I’m buying every month) stars Kenan Kong a regular Chinese guy who, so far (I’ve only read #1. #2 is on the way) is a bit of a tool. No kung fu. No super smarts. No stereotypes. Best of all, it’s written by Gene Luen Yang a Chinese-American writer.

One day I’m hoping that campaigns like #StarringJohnCho and #StarringConstanceWu is no longer necessary. There is some incredible work though so check out the hashtags to get a good idea.

So, how can my children or my little cousins to grow up and not adhere to those stereotypes if they don’t get to see people like them in popular culture? Let’s help Asian people get more exposure in the media as regular people rather than the terrible old stereotypes of times gone by.

As mentioned before this is a slightly different kind of post. I don’t write about this stuff often but this is the tip of the ice berg. I’m keen to write more like this. Would you like to see more? Pop in a vote on that poll for me. Agree? Disagree? Pop a comment below.

One thought on “Culture, Identities and Representation.”