So it’s the time of the year where giving is encouraged. Times are hard right now and the news, media, papers, magazines are all awash with stories of woe, things that need to be changed. There are a lot of issues out there that need people working on to make sure that our country and our society changes for the better.

There are a bunch of things that I’m passionate about and lots of issues that I’m eager to tackle in anyway my time and energy will allow. For example, mental health. If you’ve read my blog before, you’ll know that I’m keen to get people talking about mental health. Trying to take power away from mental illnesses by acknowledging that they’re just a small part of what makes us who we are. I’m constantly planning, brainstorming and talking to others about potential campaigns that I could run to potentially tackle the issue and I feel like in my own very small way I’m already campaigning for change.

Lots of people, however, are what some call Armchair Activists or Slacktivists.

“One who sits in their armchair or desk chair and blogs or posts Activists issues on facebook without ever really doing anything about said issues or exercising any form of activism as it would require that person to actually leave the armchair.”

“The word is usually considered a pejorative term that describes “feel-good” measures, in support of an issue or social cause, that have little or no practical effect other than to make the person doing it take satisfaction from the feeling they have contributed.”

I’ve been guilty of being a slacktivist before. Occasionally I still feel like one. However, I often get feedback about my efforts in trying to get people to talk about mental health and it helps me realise that even my small little blog and the openness in which I talk about my own mental problems and encourage people to do the same is helping a them come to terms with the hand that’s been dealt to them. This isn’t me tooting my own horn, or blowing smoke up my own chimney or another way of saying that I’m showing off. All I’m trying to do is show people that it’s not as hard as it sounds to campaign for something you care about. There are small things you can do, like blog and talk and share your story or the story of others (who are happy for you to do so). It might not feel like you’re campaigning, but at the very least, you’re laying the groundwork for a campaign. 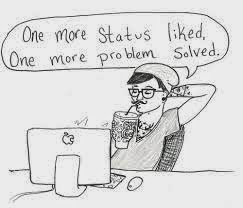 I’m lucky enough to be surrounded by people who are motivated enough to campaign about the things that matter the most to them, even though sometimes they work themselves to sickness!
The message I’m trying to get across in this post is as the title says. Don’t just whine about the issues that you’re upset about. Get up out of your armchair or desk chair or sofa and do something about it.
If you’re interested in running your own campaign check out these links.
http://www.o2thinkbig.co.uk
vinspired.com/cashpoint
http://www.starbucks.co.uk/responsibility/community/youth-action
Alternatively, search for an existing campaign and volunteer for that. Chances are, there are tons of campaigns that people have already started which would be happy to have some willing volunteers! 🙂
SO
Don’t complain, campaign.
A